The last blog ended with the grounding on Dauphin Island after the Wooden Boat Festival in Madisonville, LA, and waiting for word from the insurance company.  They send an adjuster and agreed to pay for whatever it takes to make the hull water tight again, and rebuilding the rudder, which became my 2013/2014 winter project.   Tom from Diversified Marine Services in Mobile, one of the few "wood boat guys"  left, along with Turner Marine took on the project.  All the bottom paint, just applied six months before, was again ground off the hull. The bilge was filled with water so we could see the areas it was leaking out, assuming that if water will come out it it would probably come in the same place. The rudder was taken off  and the broken hinge removed.  This may sound routine, but in fact the rack and pinion steer mechanism had to be taken apart, and the prop shaft removed from the engine to allow the rudder post to slide out of the boat. I learned that the entire rudder was made of solid teak, and looked to have never been removed from the boat since it was launched. 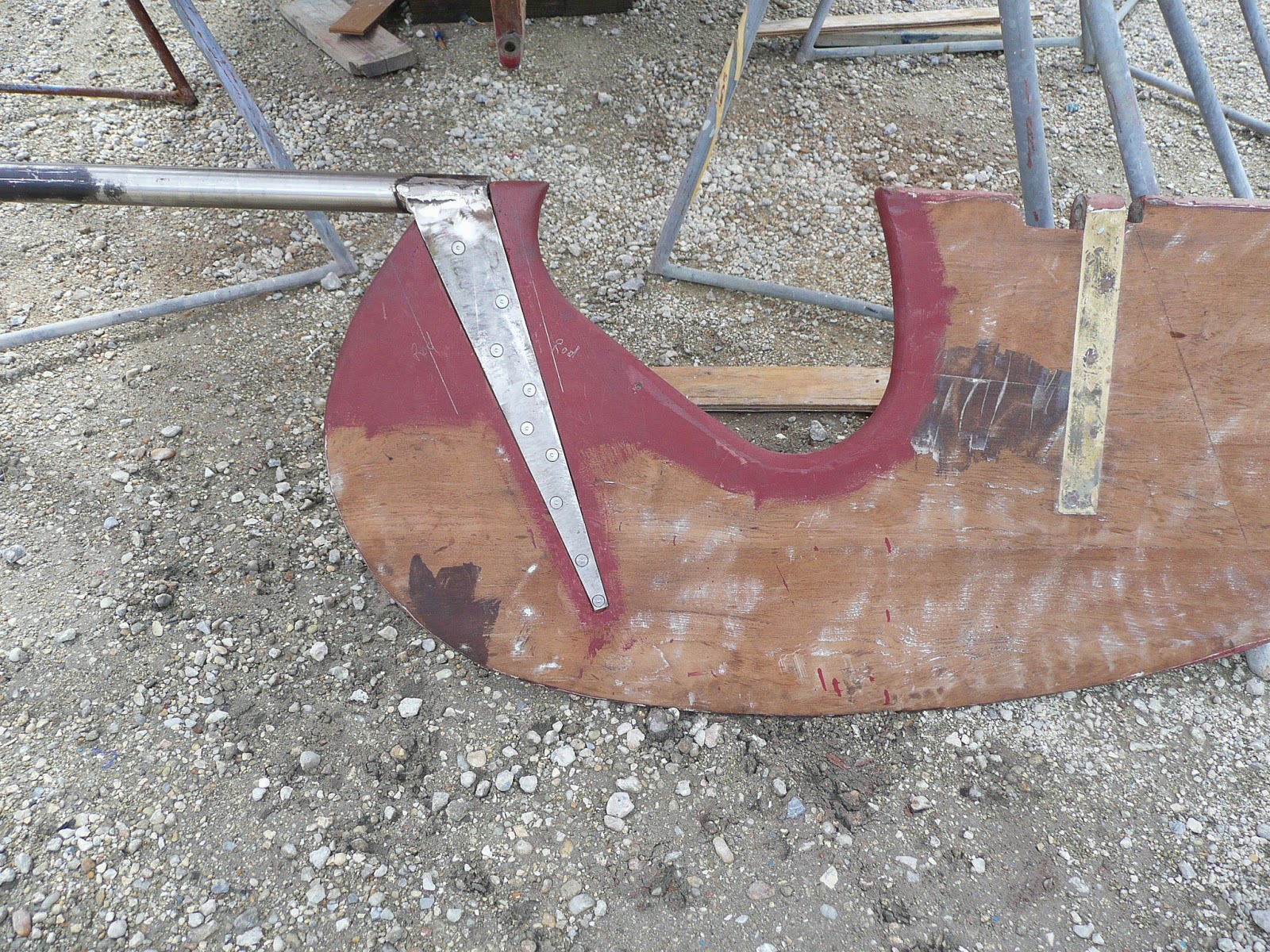 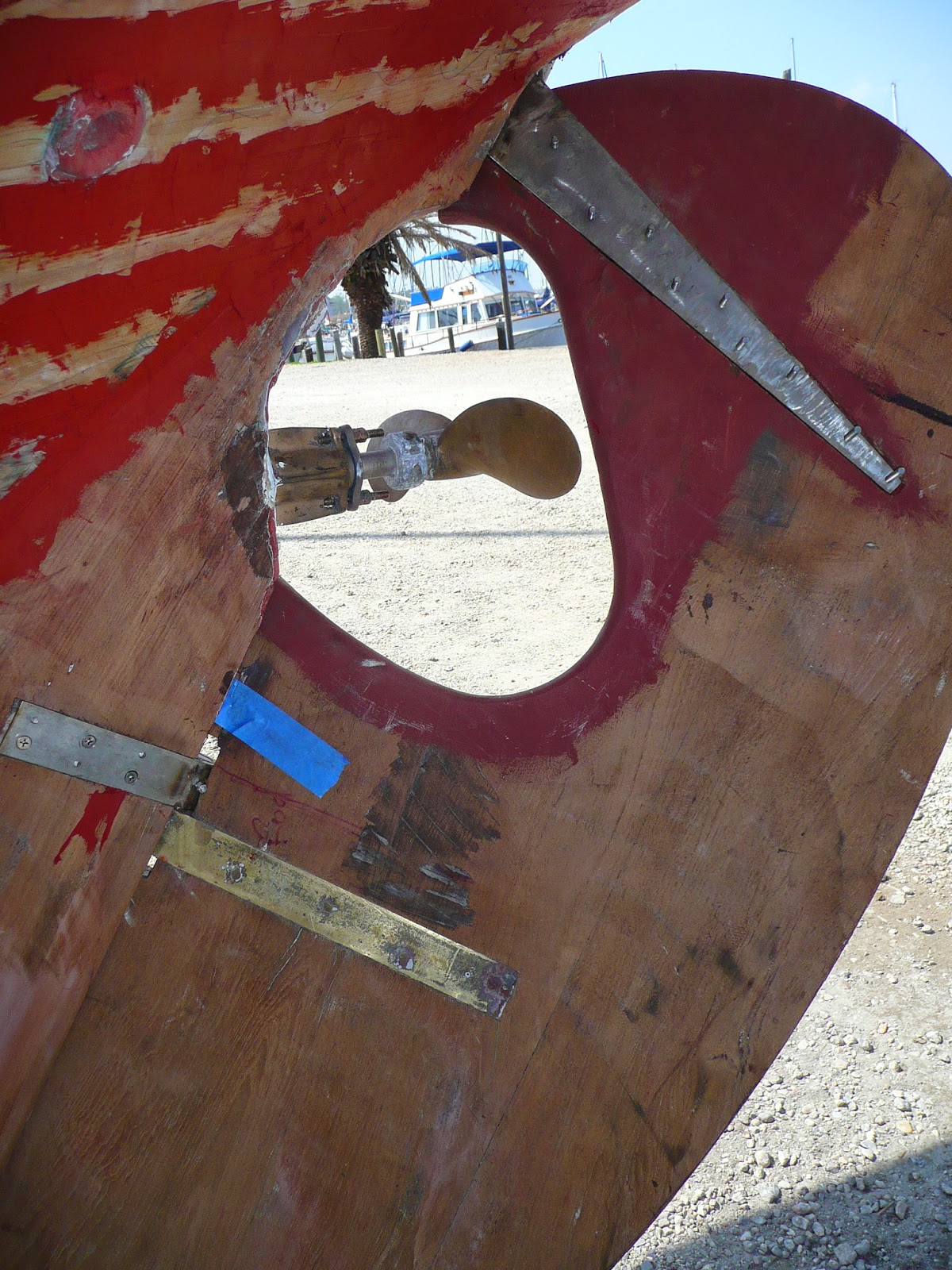 I had the new hinge fabricated from stainless rather than bronze, because it was not just the hinge but the complete rudder post and topmost hinge was one piece.  Stainless was stronger and less expensive, and since it was to be painted and under the water, I felt secure in sacrificing this small amount of authenticity for the integrity of the boat.

While the hinge was being fabricated Tom removed all the old cotton caulking from between the planks, from the keel to the waterline.  Except for a few places where the cotton had rotted from water exposure, he was amazed how preserved it was, and estimated that it had been at least 30 years since it had been replaced.   After letting the groves dry out he started the process of replacing the cotton batting.  He first painted the inside of the groves with thinned bottom paint, then using the special tools that look like wide chisels without an edge he would lay in a bead of cotton batting and tap it deep into the space between the planks.  I didn't count the number of planks or the total length of batting pressed into the seams, but I know the planks were only 4-5" wide and started at the top if the keel board to the waterline in a nice wineglass shape for a total of about five vertical feet and thirty-one foot waterline. 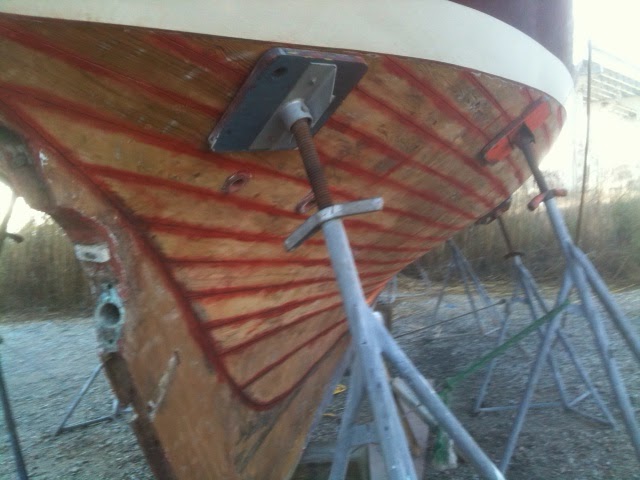