Last fall while returning home from the Madisonville, Louisianan Wooden Boat Festival, where we  awarded First Place for Sailboats, I had made arrangements to put Destiny on display at the water front on Dauphin Island.  While following the channel from the ICW to Aloe Bay, on the North side of the Island just west of the bridge,  we had a soft grounding.  I was watching the depth meter closely, thought the channel was supposed dredged to 6 feet, and Destiny draws five feet.  The transducer is located a couple feet below the water line on the starboard side of the hull, and was reading a consistent 6'-6'-7'-5.5'- 6' - 0'.  We were just left of center of the channel, but we were stuck.  I tried in vane to back off with the engine in reverse, so we flagged down a passing power boat who was gracious enough to let us throw him a line.  He first tried to back us off but his 90hp outboard Just churned up the water as the lines tightened to laser beams.  Then they came around to our bow and tried to pivot us off.  After several attempts this method was starting to make progress and soon we were floating again in the deeper part of the channel, and motored on down to the bulk head and secured the boat for the night.
The following morning, I came to the boat and saw the water was up to the bottoms of the floor boards.  The switch to the electric bilge pump took this opportunity to have a mind of its own and decided to go on strike.  After some official language and playing with wires it came to live and shortly dispensed with the invading water.  Since Destiny had before always had a dry bilge, except after a rain, I figured we must have jarred something loose the day before.  We sailed her back up to Turner Marine on Mobile Bay with no issues but kept an eye on the bilge.  I called my insurance carrier to alert them that there may be a problem and watched the bilge.  The problem seemed to get worse rather than better and the experts at the boat yard said we'd better pull her out of the water and take a look.
I did get a surprise.  Out of the water I saw that the brass rudder hinge was broker and the top of the rudder was cracked and bend over to one side.  Actually the hull itself looked pretty good, no sprung planks, no gaping holes, but I could see water seeping out of several of the lower seams right above the keel. 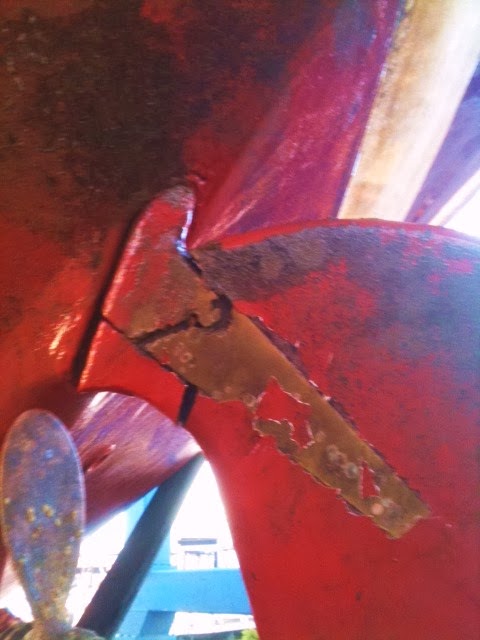 I called the insurance company back and they agreed to sen'd an adjuster.