I can't believe a full year and many change has gone by since I last brought you up to date.  After the hull was re-caulked, primed, and painted, 2014 was quite a year  on the waters of Mobile Bay and the Gulf Coast for Destiny.  We participated in a few MYC (Mobile Yacht Club, 2nd oldest Yacht Club in the United States) Thursday night "fun races", then we took a first place trophy in the Pirates Cove Yacht Club wooded boat show, took first in class in the 56th annual Dauphin Island Regatta, and was invited to take part in the 150 anniversary reenactment of the Battle Of Mobile Bay, famous for Admiral Farragut's pronouncement "Damn the Torpedo's, full speed ahead", as he and his fleet of Union ships ran the gauntlet between Confederacy held Ft. Morgan on the East side, and Ft. Gaines (Dauphin Island) on the west side of the entrance to Mobile Bay. The event turned out to be a grueling three days of cannon fire and black powder on the decks.  However it too was fun and Destiny received many accolades and was seen on TV with the other 25 boats, including two historic Biloxi Schooners...though I believe Destiny was the oldest boat participating  in the event. 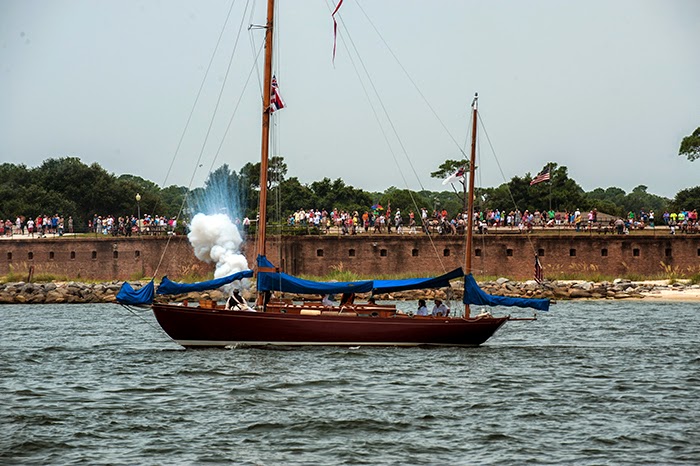 150th annivary of the Battle of Mobile Bay
(Ft. Gaines, Dauphin Island in back ground) 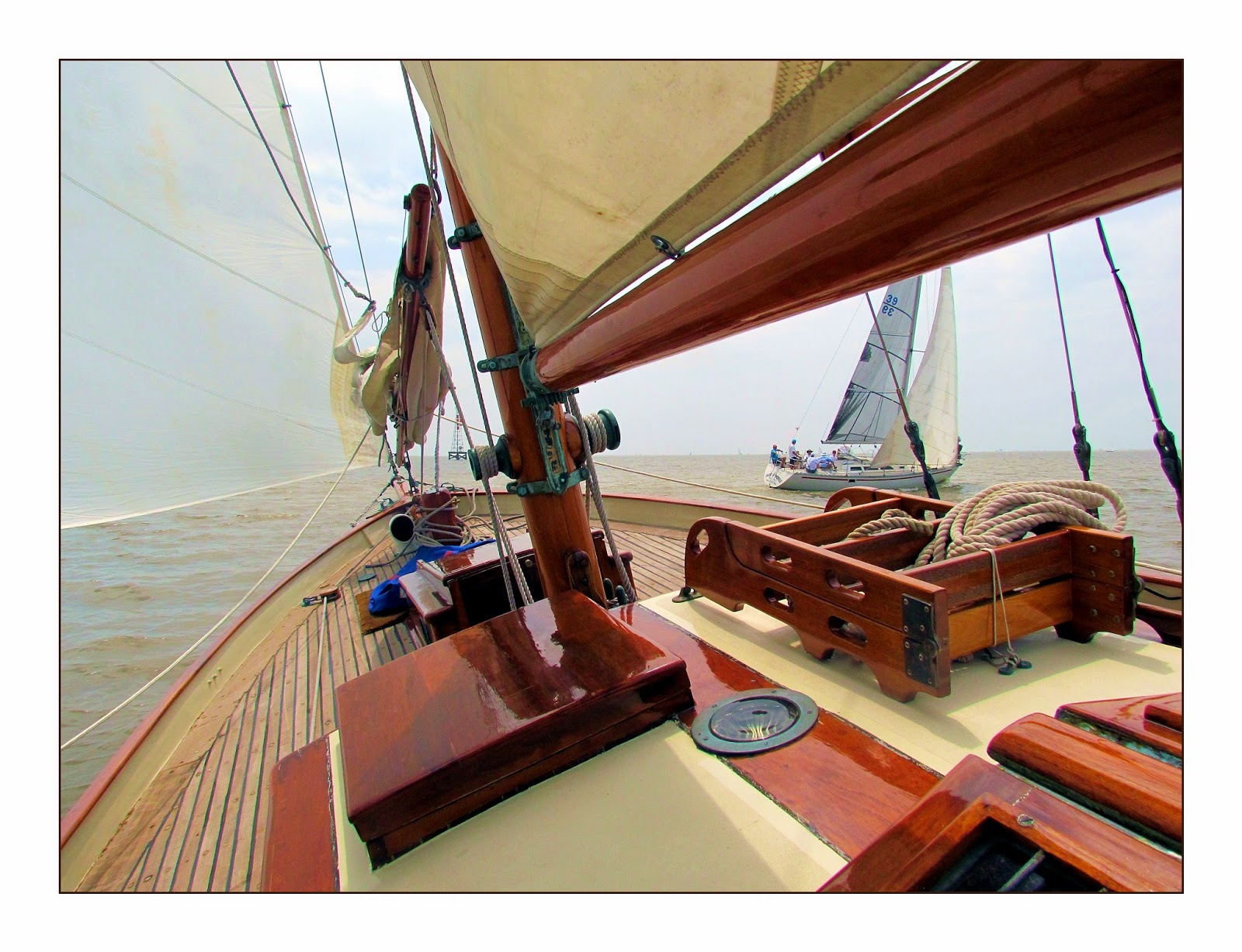 The local TV news, WKRG-TV, channel 5, a CBS affiliate,  anchor Bill Riles , heard of Destiny, and being a sailor himself called and asked if he could do an "on the water" interview.  We had the pleasure of sailing with Mr. Riles on the Bay for several hours, and later got our 5 minutes of fame on local television.


In October we sailed over to Lake Pontchartrain again for the 35th annual Madisonville, LA "Wooden Boat Festival", I put this in quotes because there were only a few wooden hulled sailboats, and when it came time to pass out trophies we were beaten by a plastic hulled Hans Christian for first place.  I guess it is no longer a "Wooden Boat Festival"...sad!  There were many very nice wood hulled power boats though, and the local maritime museum does a great job of putting on a wonderful festival.

After the show Destiny was invited to dock, and be put on display at the Southern Yacht Club in New Orleans, (the 3rd oldest active Yacht Club in the country), and I was ask to give a presentation to their members about Destiny's history.

For those of you that have been following this blog, you know that I've been actively seeking someone to take over the reigns of responsibility for caring for Destiny into the future.  In November, I received an inquiry to my ad to sell Destiny from a gentleman in Texas, Mr. Sean Johnston, who was living in Kemah TX.   After a short initial discussion my immediate thought was that an old historic wooden boat was not what he should be looking for.  However he was not to be deterred and I soon learned he'd done his homework, delving into Destiny's history, actually learning some facts about its origins that I was unaware. For example, as you may have read in earlier blogs, it was reported to me by Pat Atkin (Daughter-in-law to William Atkin) that her Father-in-law had first published his plans for what he called the "Meridian Yawl" in the April issue of MotorBoating Magazine, 1934.  Mr. Johnston learned that that article actually was publish later in 1938 the same year Destiny was launched.  He also determined that Mr. Atkin named his designs after the name of the boat he designed for a client.   Given, that we know the plans for Destiny were drawn in 1937, and now knowing the article was written a year later, there is a possibility that Destiny (named in early 2000s by the sailing school Life Sail, in California) may well have been the original Meridian for which this model was named. Needless to say we are just speculating since we have found no records of registration or USCG documentation from its initial launch in 1938.  As reported before, all I know is that the plans were drawn for a John String.

In any event,  Mr. Johnston came to see Destiny, had it surveyed, went on a sea trial, and fell in love as I had five years before. This all took place in January and February of this year (2015) and when the weather looked as thought it would cooperate Sean, and two friends came to Mobile to sail Destiny back to Texas.  I had promised to sail with them on the first leg of the trip to Gulf Port, MS, 70 nautical miles, a long way to accomplish in those short March daylight hours. We left Mobile in the early morning and sailed into a cold rain that lasted most of the day. By the time time the sun was inching its way to the horizon, we were in sight of the entrance to Gulf Port Small Boat Harbor, and my last sail on Destiny came to a close. 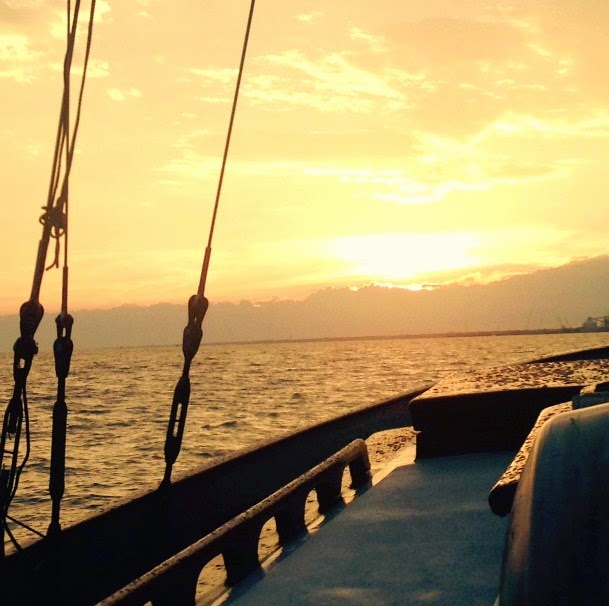 My last Sunset sail on Destiny 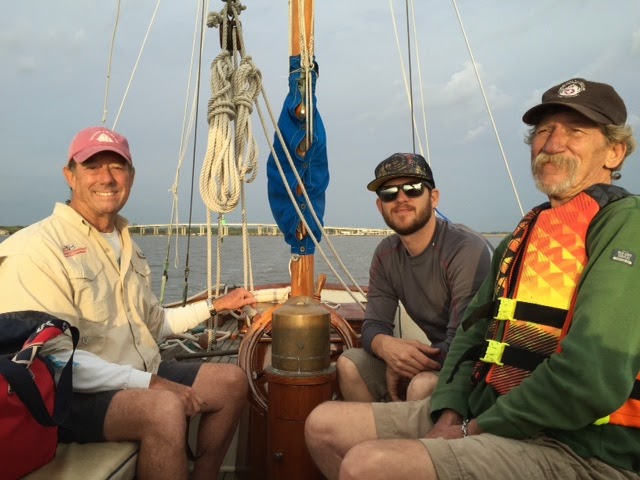