It has always been my intention that once the restoration was completed to bring Destiny back to Marina del Rey, about a 30 nautical mile trek around Palos Verdes peninsula, north past the Beach Cities.  Before she was sold to the individual that abandoned her at the yard, she was part of a sailing program for underprivileged children, and sailing out of Marina del Rey.


When I returned from my latest delivery, I was disappointed to learn that the mechanic had made no further progress with the old Gray Marine.  It was now the first of December and I really wanted to have her close to home before the winter rains. I asked around and was told of another mechanic, closer to my generation, who could fix anything and knew these old engines.  I’d heard this before, but at this point I figured I had nothing to loose.  His name was Silver, when he arrived at the boat I explained all that had been done so far; rebuilt carbureator, new wires, new points, rebuilt distributor, new plugs, etc.  He, like the others, tore into the engine with abandon.  He too wanted to blame the carbureator at first and replaced it with one he had at his shop,  when that didn’t solve the problem he was convinced it was the fuel pump, but luckily when he tested it, the fuel flow was strong.  Next he removed the distributor and tested spark, even I could see the tiny light jumping in sequence.  Then, unlike the others, he removed the plate at the rear of the engine into which the distributor attached.  Here was a fiber gear.  Holding the distributor armature and turning the gear he found that the gear was slipping.  I saw the nod of his head as he lifted it to show me the problem.  The engine could not stay in time.  “I doubt if we can find these gears anymore, but I think I can fix it.”  He said.


“How long?”  I asked expecting another week at the least.  “I’ll have it back together in the morning.” He said, it was already 4:45 pm.  Sure enough the next day when I arrived at the boat he was there and the engine was purring like a lion.  “You know, your starter needs to be lubricated, I’ll take it to my shop and have it back tomorrow.” The starter, though reliable, was making a terrible noise when it kicked in, so I consented. Again good to his word in the morning a new starter was bolted on the block. “Oh, I had a rebuilt one at the shop, so I just swapped them out.”  He said as he packed his tools.  “Give me a call if anything goes wrong.” 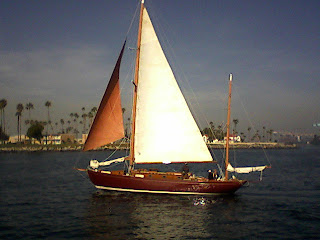 Thinking a great re-launch voyage would be to go to historical Catalina Island,  Valerie, myself and some friends made New Years Eve reservations at Two Harbors, about a four hour sail from our work docks in Wilmington.  Bright and early the morning of New Years Eve, we packed the boat for two nights at the island and fired up the engine.  We eased the boat out of the slip and retraced our route of the previous month, but this time the engine hummed along without a glitch. It was a sunny December day in Southern California, but when we turned under the Vincent Thomas bridge we couldn’t see past “Ports O' Call,” and the closer we got to the ocean the denser it got…the dreaded California FOG.  We ventured out hoping we would see some clearing, there were even signs of blue if you looked straight up, but as soon as we passed we were engulfed in a cotton like fog so thick I could not see ten feet past the bow.  We didn’t have radar, or even a horn, I hate to say, so I turned around.  Three more attempts were tried that afternoon before calling it a day heading back to the slip.


New Years day was like another time entirely, and one would not have guessed we were in the same harbor when we again slipped out of Colonial marina.  My volunteer crew was up for another attempt, and this time we had a delightful and uneventful motor-sail to Marina del Rey.  The winds were light, but we were able to sail a little after passing Palos Verdes and falling off to a heading of 350º  All four sails were flying and we saw 7 knots on the hand held GPS. 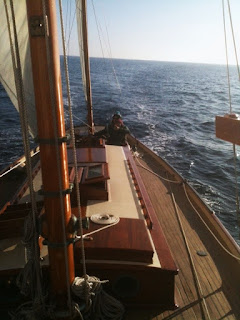 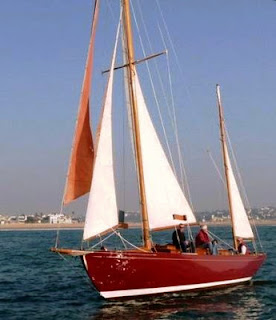 I had arranged for a temporary slip on the sea wall in front of the “Ship’s Store,” on Panay Way, and by 3 p.m. we were pulling in.  No sooner than the lines were tied, we already had an audience of on-lookers.  Shouts of “She sure is beautiful”, and “Now, that’s a real boat” were coming from the walk way along the shore. I was beaming inside.

Since then we have taken the boat out for one afternoon sail on to get some photos under sail, but the winds were light.  Getting out of the tight slip was quite a challenge.  Luckily, there was an empty slip behind to back into, but still needed to have the bow pulled a round manually to make the turn.  These boats were not designed for the compressed boat slips of the modern marinas.  We watched the start of the “ and Return” race, the first of the 2012 season, and paced the cruising class start for a while.  I felt good that we were keeping up with the new fancy fiberglass cruisers until we had to fall off and head back to the marina. 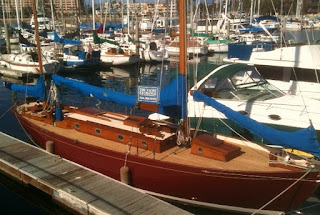