After Valerie and I returned from , the organizers of the up coming Long Beach Boat Show, called to ask if the Atkin Yawl could be ready to display at the boat show this year. They wanted to have a public draw and knew that a classic, historic yawl would help bring in patrons. Working fast and furious, we managed to get the last of the finishing touches ready for show. I found an antique brass compass and binnacle on eBay to replace the scratched and dented chrome one. The new brass water pump replaced the old, rusted stainless steel at the galley sink, but the copper tubing to the water tanks was not connected...plumbing has yet to be addressed. Also, Lendsey Philpott, author of the definitive decorative knot book, The Ultimate Book of Decorative Knots, came aboard and tied Turks heads on the "King pin" of the wheel, the wheel shaft, made a decorative mat for the cockpit, and made eight new sail ties for the main, mizzen and staysail. 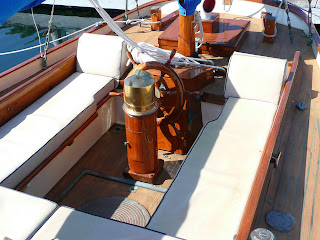 The show was only a few miles from the boat yard where the restoration was being done, but because of a rail road lift bridge, I had to take the boat the long way around , past San Pedro, and the LA Gate to get around to Rainbow Harbor, where the show was being held. The engine hadn't been run for several months, but it started easily and seemed to run fine. My friend Bill came with me and we eased out to the main channel and pointed her toward the Vincent Thomas bridge. After a couple hundred yards the engine started to slow down. I nudged the throttle, and it picked up but shortly it slowed again. By now we were half way to the fuel dock, where I was headed to top off the tanks. We made it, but when I tried to restart the engine after fueling, the 30's vintage flat-head Gray Marine, refused to start. 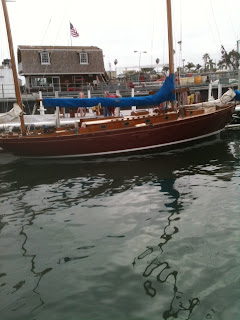 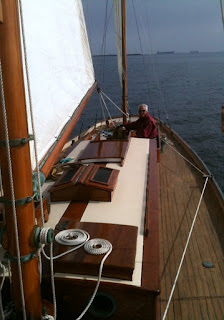 The guys at the fuel dock suggested I call a local mechanic who arrived within the hour and then for the next two hours tinkered with the engine. He finally got it going again, and we were off, but within two hundred more yards the same thing happened. It started to slow and finally died entirely. The wind was whispering at less than five knots, and the tidal currents were pushing us toward the rocks. Bill and I got the mizzen and staysail up, giving us just enough way on to ease away from the rocks and head toward the Queens Gate side of the harbor. I then called the electrician, Ian, who had been replacing the electrical wiring on the boat, and who had a Boston Whaler moored at 's Shore Line ; he volunteered to come to our rescue. The wind had picked up a little by the time Ian arrived with the Whaler and we were sailing comfortably down wind. He came along side, secured the lines, and we proceeded toward the show. This was the first sail since the sea trail, more than nine months before. I was even more impressed with Destiny's sailing ability this time. The old sails had been cleaned and still held the shape well.  With the help of the Whaler we maneuvered into the space assigned for the show and tied the lines. I then called the mechanic, who promised to be there in the morning before the show opened.

The show began on Thursday morning and ran though Sunday.  From the first day, there was a constant stream of admirers coming aboard expounding “ooohs and aaaahs.”   I was told we had more visitors than any other boat in the show; it certainly was the oldest boat in the show. 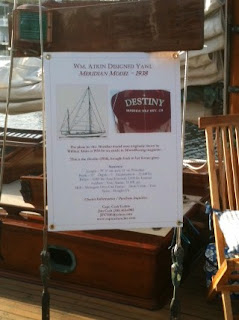 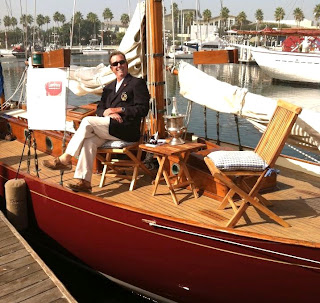 The mechanic, actually was at the boat on several mornings before the show opened for the day, showing frustration but espousing confidence he would find the problem and get the engine running.  Finally on Sunday, the last day of the show I came down the docks in my yacht club blazer (boat show attire) the engine was running as smooth as a top.  The mechanic was all smiles, proud that he prevailed and assuring me he would not be charging for all the hours he and his partner had put in to get in running.

Monday morning after the close of the show, Bill and I once again cranked the engine, released lines and motored out of the harbor.  It was like déjà vu.  A couple hundred yard past the harbor break water, as we approached the Queen Mary, the engine started slowing.  We were lucky we made it to some open water before it died for good.  Again we scrambled with sails, putting up the main, mizzen and staysail.  I had a Yankee hanked on to the forestay, but had yet to have sheets attached, so we had to settle for what we had.  The morning wind was virtually non existent as usual for this time of year, but give credit to Mr. Atkin, we started to make a little headway.  As morning turned into afternoon the wind picked up and we tacked into the wind for the rest of the afternoon until about was able to fall off toward the north down the river past Port’s of Call, and under the Vincent Thomas bridge.  At this point my thoughts turned to how would be get Destiny back into her slip since the entry was mostly blocked by a big power cruiser allowing barely a few inches between the dock and the boat to squeeze by.  Bill was going to have to step off the foredeck when I stuck the bow in, with little or no way on, and fend off the dock while I fended off the power boat.  Without and engine in reverse and the river tide current to deal with, this was going to be tricky.  We dropped the main and mizzen up channel and sailed on staysail alone with the wind behind us.  With several hundred feet to go, I tried the engine again, and it fired up like there had been no problem.  We dropped the staysail, and using reverse, I was able to slow down, Bill stepped off and as luck would have it, the owner of the power boat saw us coming and helped guide us safely passed his boat and into the slip.   I tied the lines and called the mechanic.

I had a few days before I was supposed to leave on a delivery of another boat to , so I managed to retrieve the full boat cover that had only recently been delivered from the canvas maker, and cover the boat.  I knew it would be over a month before I returned. 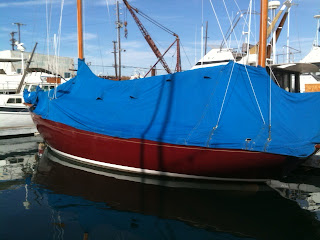