The following is from the March issue of Mariner Magazine, published in Marina del Rey, CA


It has been a struggle, but I’ve survived.  A year ago, last December, I reported coming down with a full blown case of the dreaded Woodboatitis.  I’m happy to report that I’m on the mend with a diagnosis of full recovery, though a lot poorer.


In my case, it was exposure to a 1938 vintage racing yawl designed by William Atkin, called the , and built by shipwright Joel Johnson in his shop in .  I’d been exposed to wood boats before, but this one really threw me for a loop.  I had let my guard down after attending the Wooden Boat Festival in Port Townsend, WA, when friend (I use that word loosely) called and lured me to an old boat yard in .  The next thing I remember was breaking out a crisp new check book and writing the equivalent to the “Great American Novel.”  Before it was over, I’d gone through several new packets of check, and wore out several credit cards to boot.  My insurance company is refusing to reimburse me claiming it was a non-covered ailment.


“You’re spending Millions of dollars on that old boat” my wife would harangue…I hope she’s exaggerating, I haven’t added it up… every time I would mentioned the stack of unread LA Times and suggest we drop her subscription.


The disease started with a complete disassembly, clean, and preparation the interior for new paint and varnish, even the toilet was removed. Then a coat of white primmer was sprayed everywhere, from the keel board to the cabin top, in, under, around and through every nook, cranny, and floor board.  Then three coats of nice soft semi- gloss white with the natural teak, oak and mahogany trim and sole varnished to a high gloss…Nathanael Herreshoff would have been proud.


By spring, the malignancy and metastasized to the exterior where the decks were tackled with abandon, over a thousand bungs replaced, and the old grout removed and recauked.  As spring rolled into summer it was time to remove the masts from their seats, strip them of the old varnish, and replace the ancient standing rigging. Wow, things have changed in the rigging world in the last seventy years.  At the same time the cabin structure was scrapped to bare and new varnish applied.


When the rigging was completed the hull was next and the process began with a with a haul out and tenting for termite treatment, the mandatory removal and inspection of fasteners for insurance and a fresh coat of bottom paint and sacrificial zincs.


As summer gave way to fall, three quarters of the year, was gone and the hull had yet to be approached…it was time! Again, stripped down to bare wood, mahogany over oak frames, old caulking removed from between the tightly faired planks, and West System applied.  Then sanded, primed, and painted…a rich burgundy to complement the teak decks and mahogany cabin.  Her name Destiny was re-applied and she was launched: a miraculous transformation had occurred.


She looked beautiful, but she still needed her electrics updated and her vintage Gray Marine auxiliary brought back to life.  By this time a new winter season, the earth having rotated a full 360º, came upon us and she was done… my malignmant was starting to abate.   Her interior glowed with new lighting, her engine room swept clean of fumes with a new blower, and all her navigation lights brightly warned others of her presents at night.   Her old gray Gray was purring on command and she moved gracefully through the water, 5 knots, at only 1500 RPMs.  We had done it, we saved a vintage nautical classic from the wrecking saw.


Neptune, or some such deity must be pleased as I’m on my way to full recovery… and hopefully with a full dose of immunity. 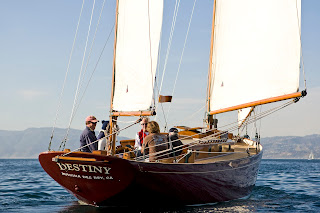