Coming down to the wire

Restoration of an Atkin Yawl
We are coming down to the wire with the restoration.  When Valerie and I left town early September, for a long planned island-hopping sail off the Amalfi Coast of Italy, Destiny had been hauled again, this time for the final water-line stripe to be painted and the name and hailing port applied to the stern. The yard agreed they would re-launch in my absence. 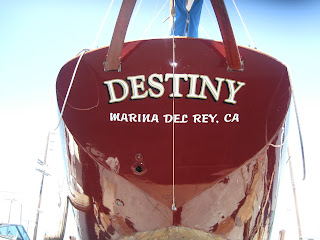 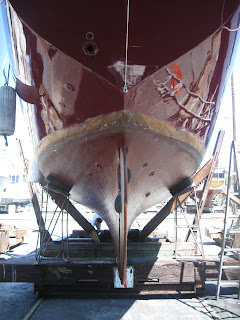 When we returned from , the boat was back in the slip, the white stripe gleaming, the name painted on the stern in bold white and gold, all the sails bent on. The final details were, and are being completed, and so many final details there are.  There is two drawers of leftover screws and parts, when I ask Luis where does this go holding up a brass bracket of some kind, he shrugs his shoulders and says “ I don’t know, I didn’t take it off.”  How did it get in the drawer if you didn’t take it off, I wanted to say; for that matter how did we end up with two extra drawers?  But, she is looking beautiful.
The decks have been the final outside challenge, more bungs being replaced, and half the caulking had to be dug out and replaced.  The good news is that the teak decks are just that, the whole deck is teak through and through, more than a half an inch thick. I love natural untreated teak decks, but for a practical purpose I decided to have the deck treated with a “natural” sealant protectorate from Seamco. I’ve used it before on previous boats with teak veneer decks, but it makes the color a little darker that I would prefer. It fades after a while so I’ll live with it. 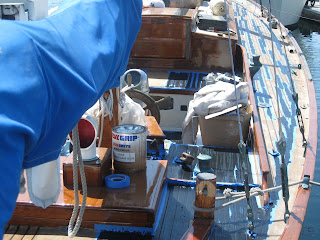 I can’t believe it is now Fall, and the restoration is still going on, and the electrical is still not completed.  I had high hopes for sailing in the McNish Classic regatta in August, or the wooden boat festival in , or the “One More Time Regatta” at Marina del Rey, in September…but for these I’ll have to wait for next year.
Did I mention that I heard from Pat Atkin? She still maintains the website with many of the plans William and his son John, Pat’s husband, designed.  She told me William originally drew the plans of the for an article in Motor Boating magazine, April issue 1934.  She said she would send me a copy with photos…I can’t wait to receive it. 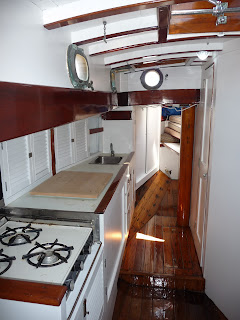 Also, I got an email from a gentleman from , who saw this blog, and sent me photos of a model he owns of the built from William Atkin’s original plans for the boat.  What a wonderful tool this internet!! 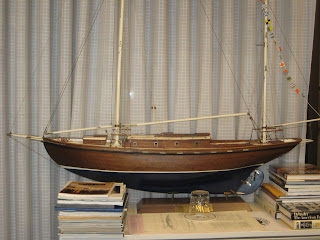 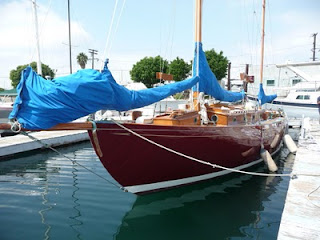 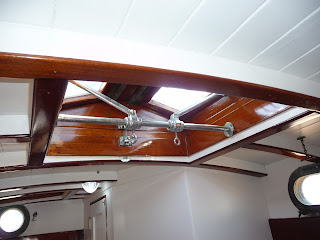