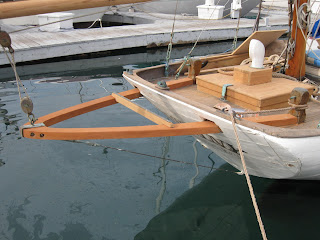 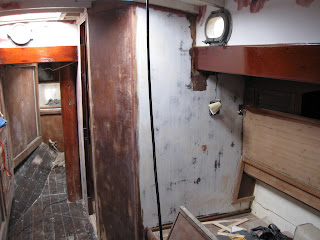 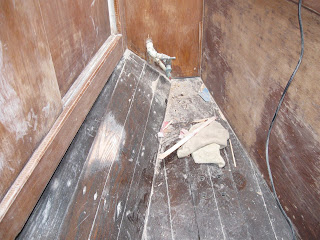 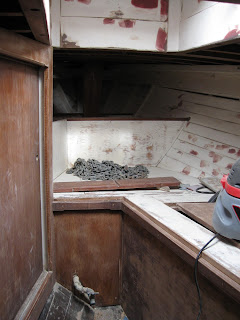 Now that the purchase decision was made, Oh my God, what have I done?
The boat had been pulled out of the water, the bottom painted and the zincs replaced by the boat yard that sold me the boat before the sea trial.  Normally, that would have been my first chore, so in the interest of saving money and not duplicating effort, I decided we should start inside and work our way out.  It was January 2011 in , rainy season, so working inside to start the project was ideal.
I started by removing the sails and covers both from the spars and the fo’c’s’le and taking them to the loft. There were two set of sails, the old ones and the very old ones.  The sail maker actually recognized the names of the lofts that made them originally, (Schoonmaker Campbell Sails) though no longer in business, were considered high quality for the time.  We decided to have the newest set cleaned and repaired where necessary.  There was a large, faded red, , a staysail, a main and mizzen sails; these were left to be reclaimed later. Next was to remove everything not screwed down form the inside.  Out came anchor, chain, rode, sail covers, life jackets, cushions…even the toilet was unbolted from the floor (which was brand new, never used with the manual, still in the plastic taped to the seat) and  taken out in preparation for a complete redo of the interior.
Let me digress here for a minute and discuss my philosophy of restoration of an old boat.  Ideally the total amount invested will not exceed the expected market value of the completed boat on the open market.  This number, of-course, is rather abstract.  I did research on similar vintage and type boats to learn what the asking prices were currently.  But, given the height of the depressed economy, with boat dealers and brokers dropping out like flies, and the actual sale prices of used boats at an all time low, it was anyone’s guess what my restoration budget should be…not enough, for sure.  However, I told myself, this project was for the love of the saving a piece of history, not for profit in the resale of the finished product, no matter how that went against my grain.  So, my philosophic modification was; I would not skimp or compromise on anything that was needed, but at the same time I would not be extravagant either.  Also, before making the final decision to buy the boat I did a preliminary budget, and got quotes from several of the artisans that I’ve used before, on the various aspect of the restoration, and decided that the project was worth the effort.
This brings me back to the interior finish.  When I first descended into the interior I found an all natural wood finish.  The natural oak floor boards, the walls and cabinetry all natural wood finish.  Though beautiful it also made the interior very dark.  I also learned that the interior had been modified from the designer’s original scheme.  What I couldn’t tell was weather that was a modification in the original building or a change made later.  In any event, I made the decision change the interior from all natural dark wood to the classic Hershoff style of white with natural wood varnished trimmed highlights. This decision was partially steered by economics; it’s much cheaper to paint than scrape and varnish, and partially to brighten the interior.  Having made this decision the first steps were to prepare the interior for painting.  And, so it began.
Posted by Capt. Cash Yachts at 11:41 AM