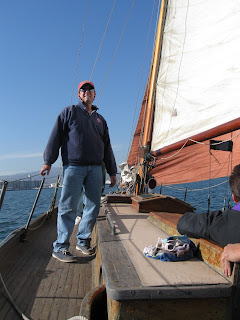 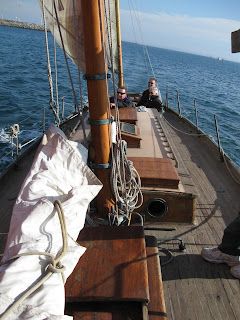 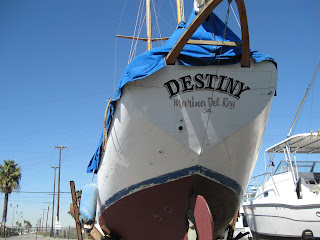 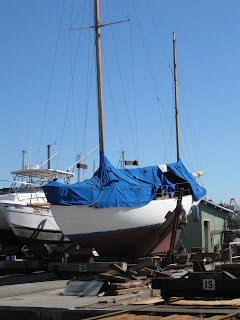 Saving an Atkin Yawl
…continued
By Capt.
After seeing the old yawl for the first time and having ducked under the torn canvas and into the interior, I knew I was in trouble.  I was told it was a William Atkin design so I did a little research.  I googled his name and to my surprise, a link to many of his old plans came up. I found the plans for this very yawl I had crawled though.  It was called the , 39’4” on deck, on the water line, beam and draft.  It was rigged with a jib tacked to a bowsprit, a club footed staysail, main and mizzen.  She displaced and had an of lead in her keel.  He (William Atkin) said it was called a “rule cheater,” meaning she had certain advantages in handicap over her competition.  However, this of course was in the early 1930s when the plans were first drawn.  All this further piqued my interest, and the desire to save this boat from the chainsaw grew even stronger.
The yawl was now the property of a local boatyard, having been abandoned by its previous owner with quite a yard tab left unpaid.  The acquaintance that had brought the boat to my attention was a salvage dealer and had done past business with the yard.  I asked, what did he think it would take to buy the boat?  He started quoting the current price of lead on the wholesale market, the value of the brass cleats and windows, the tab owed by the past owner.  I listened, less than patient, wanting to say “Yeah, yeah, yeah…so?”  I finally said “Offer them $3,500.”  Well, that didn’t cut it, but after several weeks of negotiations and the yard agreeing to haul the boat for new bottom paint and shaft zincs, and having their mechanic put in a new battery and get the old flathead four-banger “…running just like a song” to quote Johnny Cash, we came to a price.  The final price was a little more than double my original offer.
The day arrived for the sea trial and I was accompanied by a couple friends, both of whom had owned and restored wooden boats.  The owner of the yard also wanted to go, though he confessed he’d never sailed before.  I could tell that he was a little apprehensive the when the big 150% genoa was raised up the forestay.  We healed over 15 degrees and accelerated to six knots in a heart beat, and he took a step back and lowered himself down the companion way.  “Are we OK?”  he asked, his voice gravely trying to remain calm and be brave. The rest of us were smiling.
“You are going to love sailing this boat.” My friend said already knowing from my expression that my decision was made. What a ride it was that day.  Though the winds were not strong it was evident this was a real sailors boat. I agreed to buy the boat that day and as I wrote the check, I thought to myself “What am I going to do now?”
It was agreed that I could leave the boat in the water at the yard’s marina for restoration process, but I would hire my own craftsmen.  I called the paint and varnish man that had worked for me on three previous boat projects and asked for a quote.  My goal was not to invest any more into the purchase and restoration than I thought the market would bear for the finished product.  We came to an agreement with quotes for the job, broken down by a price for restoration of decks, paint topside, varnish spars, varnish topside, interior paint and varnish, and hull above the waterline.  Since the bottom had just been repainted by the yard, I decided to leave taking the bottom down to bare wood until the next required bottom painting.
The next week we stripped the sails off, bagged them up, and I took them along with the covers to the loft for evaluation.  There were actually two sets of sails, the newest of which was estimated at about 30 years old.  The interior cushions were stored in the yard’s warehouse for attention later, and the old cover was turned over to the yard’s canvas man to be re-stitched.  I paid a deposit for materials and the process began … it was mid-December 2010.
Posted by Capt. Cash Yachts at 4:53 PM