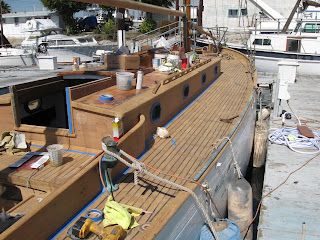 Yikes! …The more that is done, the more surfaces that will need to be done.  Meaning, one can’t just do the surfaces that we see on top; what happens when the drawers are pulled out, the floorboards lifted, the settee backs removed?  I wanted the finished product to look, well, finished.  We couldn’t have beautifully varnished and polished cabin sole and have the bilge look like a 50 year old bilge; could we? As a result, the decision was made to disassemble as much of the interior as possible, then clean and spray paint everything white before starting on the bright work.
Also, being , the “Winter” is interspersed with beautiful sunny 80 degree days between the rainy ones.  To offset the boredom and dust filled confinements of the interior, the exterior was tackled in tandem when the sun came out.   One of the first of the challenges were the teak decks.  It was anyone’s guess when they had last had attention, but since they were solid teak planks and not a veneer laid on top of fiberglass, there was plenty of wood to work with.  When they were bleached and the natural warm golden glow jumped out, they looked like new from Mr. Johnson’s shop.  But, there were a lot of brass screw tops showing so many new “bungs,” the teak cap set in the deck to cover the brass screws, were the order of the day. 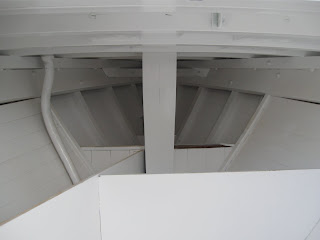 For those of you not experienced with this process, fist the old screw must be removed without breaking it—remember, they have been there for over 50 years.  Next, the hole is prepared by drilling a counter sink without enlarging the hole itself, then replacing the screw so the head is at least an 1/8th inch below the surface, then a new teak bung is glued back in the hole.  When set, the top of the bung is then chiseled off flush and sanded to meet the surfaces of the deck. We lost count after several hundred how many of these needed replaced.
All the old varnish, paint and grime had to come off every exterior surface, including cabin trunk, top, spars, cockpit, bow sprit, rails and boomkin.  The heat gun and scraper were the tools of choice.  Heat, scrape, heat scrape, was the process; inch after agonizing inch. 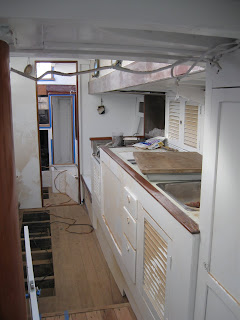 Back to the interior; three coats of white interior primer with light sanding between coats was applied to every surface, both what could be seen as well as inside and behind the drawers, lockers and storage spaces under the bunks and sinks, except the cabin sole.  Boy, was it white in there!  The interior lit up like an operating room, but that was the objective.  Then, the surfaces that were to remain “bright” were scraped, sanded and varnished, then re-sanded and varnished and re-sanded and varnished and re-sanded and varnished.  We found a whole variety of hard woods had been used.  There was oak on the floors, mahogany counter edges, teak skylight and hatches; the subtle contrast of natural wood colors gave the interior a very rich and warm feel.  The surfaces that were going to stay white was painted with a satin white finish.  I’m told this white and “bright” natural wood trim is a Herrshoff style, named after the famed yacht designer Nathanial Herrshoff.
The countertops had been surfaced at one time with a white Formica type product. It was naturally stained in places and I have been trying to decide what to replace it with.  I want to stay as close to the period as possible and thought about various stone finishes, but decided that Mr. Johnson would not want the weight of a granite counter top in his boat.  I’m leaning toward a copper counter with hammered sink, brass galley pump, and teak trimmed on the sides.  Let me know what you think?
The work continues… 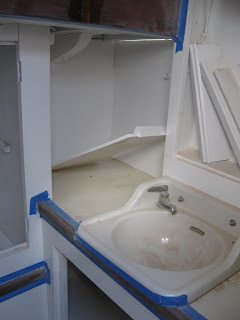 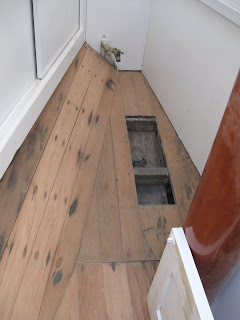