Atkin’s Yawl…The Restoration Continues
May 2011
By Capt.
The calendar has rolled into May, the sixth month of the project.  I guess I’m lucky that the majority of the restoration expense was quoted by the job rather than by the hour, for which there are countless numbers.  The work on the deck and topsides has been temporarily interrupted this week so the masts could be pulled.  I initially expected that the boatyard in which we are berthed, would pull the masts and allow temporary storage to have them reconditioned.  In fact, I had discussed this with one of the yard’s owners, but when the time came, the older brother, and I assume senior partner, said no.  No space for the masts, concerns about liability, and size of their crane all played a role in the decision to suggest we have the job done next door at another yard.  I investigated several other boatyards, and even considered bringing the boat up to Marina del Rey temporarily to have the work done.  When I learned that the biggest expense was going to be storage lay-days, my rigger suggested I invest in several Home Depot sawhorses, lay the masts on the deck, and bring the boat back to its slip for the de-rigging and restoration process.  I agreed and made the decision to use the crane next door.
In any case, I was going to have to get the engine started to motor over and back from the yard, down the river.  The last time I ran the engine was for the sea trial in December. It was Saturday, the yard was closed, and I was the only one at the boat.  What are the chances, I thought?  With the battery switch to BOTH, the gas valve in line, the choke engaged, I hit the starter button.  It cranked slowly several times and quit without even a cough.  I called the engine mechanic who, after changing the oil, filters and gave the engine a good cleaning, assured me that all I had to do was “push the button.”  I met him at the boat on Monday.  His first comment was I needed a new battery, but it was new in December, so I suggested he try again.  After tightening loose connections, we charged the battery, and the starter was spinning appropriately.  We were finally able to get a few coughs but no more.  The next thing I see is the carburetor being brought up…it looked like a surgeon ascending from an operating room with a human heart in his hand.  I was asked to go get carb cleaner and fresh gasoline.  At end of day, we were taking the antique carburetor to the shop to be rebuilt.
Wednesday, I picked up the rebuilt carb, met the mechanic and the riggers. Soon the engine was running and we backed out into the river.  The entrance to the other yard was literally a hundred yards away.  We tied up to the holding dock and waited for the crane to free up.  Within two hours we had maneuvered the boat under the crane, lifted and positioned both masts on deck and was back, tied up at our work dock.  When the main mast was secured on the deck, my first question to the rigger who was below to loosen the wedges was: “Did you find the 1938 $20 gold piece under that mast?”  Disappointedly he replied “No.”  I’ve later learned that they discontinued minting the series in 1933, otherwise I’m sure Mr. Johnson would have put one there.  Actually, we did not find any coin under the mast…so much for that superstition; though I have a very nice 1938 Standing Liberty half dollar waiting for when the masts go back in.  Better safe than sorry! 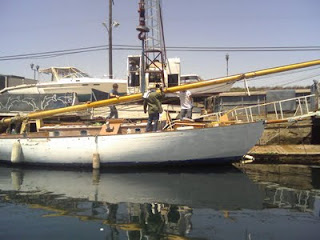 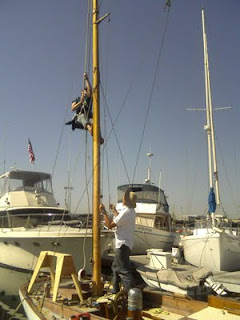 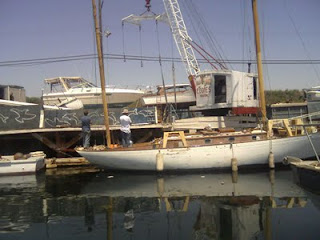 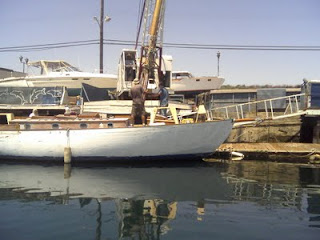