Saving an Atkin’s Yawl
By Captain
William Atkin, and later his son John, were designers of boats in the days before production fiberglass boats were being popped out of the mold and sent down the assembly line to be glued and screwed by clock-watching hourly workers.  Atkin would sell his plans and the prospective new boat owner would, if handy, build or hire a local shipwright to build their boat.  This is what happened in 1938 when Joel Johnson, a shipwright of Fairfield, Connecticut, was retained to build a vessel from the William Atkin plans called “Meridian,” a yawl rigged sailboat, 39’4” on deck, with a club footed staysail and the cutest little dog house on the foredeck.
Fast forward almost 80 years.  It was October, and I was attending the 34th annual Wooden Boat Festival in Port Townsend, Washington.  I guess I caught the “bug.”  It was subtle, so my immune system did not know to fight it with a vengeance.  I found myself inquiring about the prices of various wooden boats, with no real intention of course, of actually buying one.  My God, who in their right mind would want to take on the headache involved with the maintenance and upkeep of an old wooden boat?
Then one day, several months later, I got a call from an acquaintance who had heard my murmurings about how those old boats were really works of art, not just wooden modes of transportation … a weak moment I’m sure.
“I saw a boat you will want to see” says he.  “It’s an old schooner or something. The boatyard is going to cut it up for the lead keel if someone doesn’t buy it …Are you there?” he inquired further, my silence deadening.  I’ll only go to look; I said to myself, what harm could it do?  If the yard is going to cut it up, it surely is beyond repair; what a shame! 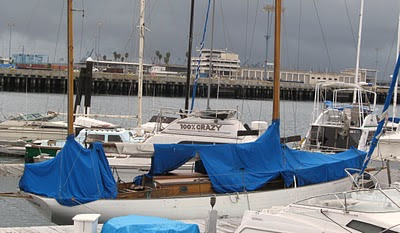 As I approached, I saw the tattered full canvas cover almost totally obscuring the topsides.  The distinctive short mizzen mast, placed far aft, and the tall main mast forward, gave away the fact that she was a yawl, very rarely seen in modern marinas any longer.  The long low sheer line, the bowsprit and the bomkin at the stern, all added to my intrigue.  My thoughts were “What a beauty!  What lines!  What a work of sailing art!”  I was clearly having a full-blown attack of “Woodenboat-itis.”
I lifted the corner of the cover and scooted under the canvas.  It was all there, the rack and pinion reverse steering with the wood spoke wheel, the brass winches, the wood horn cleats; there were even brass belaying pins nestled in holders at the base of the Douglas Fir mainmast with three-strand line figure-eighted in place.
I removed the teak hatch boards to the companion way with a slight shake to my hands and beads of cold perspiration appearing on my forehead.  I cautiously descended, waiting for the telltale smell of wood rot, which was not there.  Right there on the teak trim over the hatch was a brass plate inscribed with the builder’s name, Joel J. Johnson, .  I stepped down into the aft cabin, she was tight, not even a musty odor, only a sight layer of water kissing the bottom of the bilge.  Oh, the joinery, the woodwork, the craftsmanship.  The interior was like looking at antique furniture, not a mere boat.  A pocket door separated the aft cabin, with opposing pilot berths, from the main salon.  A long settee on the starboard side actually slid outward to covert into a double bed.  The galley hugged the port side and the louvered cabinet doors swung open and shut with ease.  Stepping forward out of the main salon past a head with toilet, a real porcelain sink, mirror and storage, I had to duck under the deck where the mast came through to stand upright again in the small dog house built above the fo'c's'le where another double berth shared the bow with the exposed anchor locker.
I was smitten.  I could not let it happen.  I could not let them cut her up.  She had to be saved. 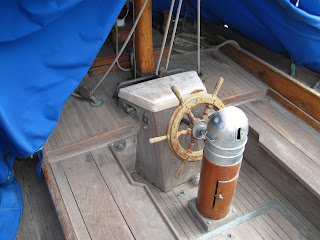 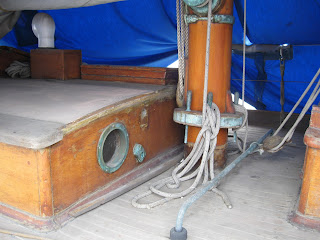 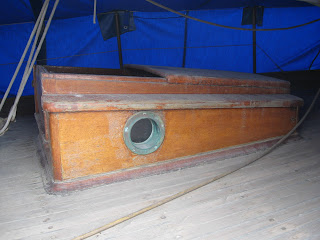 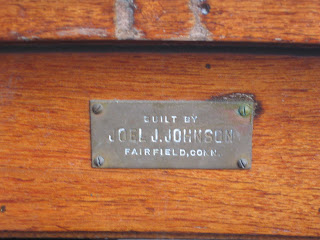