It has been a year since the restoration was officially completed, though it seems that there hasn’t been a week go by that some marina artisan hasn’t been on board performing his or her magic, and handing me an invoice.


After the regatta (previous blog) I noticed the shrouds and stays were a little loose.  Upon closer inspection I saw that the mast had slipped slightly further down into the boat; perhaps as much as a ½ inch.  I called a shipwright friend of mine and we descended into the main salon, lifted the floor board near the mast.  He stuck his arm to the elbow into bilge.  “Your mast step is broken.” he said.  How could that be I thought, I had seen the board the mast rests on it was almost of solid oak wide suspended over three stringers spreading the load more that a foot and a half in each direction.  Apparently over the years, fresh water seeping down the mast, had collected at the bottom where a notch is cut into the board to take the matching notch protruding from the bottom of the mast.  At this weakened point, with the stress put on it by the race, the board finally let go; it would have to be replaced.  “Hopefully we can the step out with out cutting any stringer, but the mast will have to come to see.”  He said, he also said his schedule was too full so he would have to recommend someone.


Soon the floor boards in the entire forward section of the boat were out, and the boat was on its way to the yard.  For the second time in less than a year the main mast was pulled out of the boat and laid on saw horses across the deck. Back in the slip, the old step was cut and slipped out of it notch in pieces.  A new step was created out of a 2”x12”x30” oak and the notch carefully cut in the exact location for the bottom of the mast to settle in.  Back to the yard, the mast was lifted off the horses, pivoted vertical, and slid back in with the 1938 silver, Standing Liberty, half dollar securely in place.   Back again to the slip so the oak floor could be reinstalled.  Several of the floor boards were destroyed in the removal process and new boards had to be cut, stained to match. When it was all completed one could not tell there had been any disturbance.  I believe that was the most expensive racing trophy I have ever received. 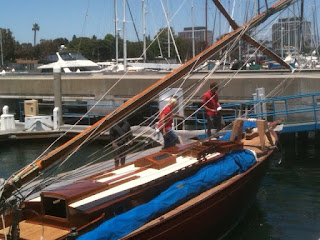 I believe I’ve mentioned in earlier blogs entries that in the history of ownership Destiny was owned by a group called LifeSail, an organization that teaches sailing to under privileged children.  The head of this organization has been an acquaintance of mine for some time and knew that I had acquired the boat.  He stopped by my office saying he’d found a old set of blue prints for the boat. Wow, what a find.  They were actually copies of the originals, but clearly show that William Atkin drew the plans, a slight modification from his original, for Mr. John F. String, in July of 1937.  I have to assume Mr. String then retained Joel Johnson to build the boat. I am doing further research to learn how long Mr. String owned the boat, if he did, and where and to whom it was sold.