Haul out for Termites and other necessities

…And so the work continues.  While preparing the hull for painting we detected a few small signs of termites, so I decided that treatment was in order before painting the hull.  I researched and learned that it was going to be more effective to have the boat tented and filled with gas, than try to treat the boat with spot application.  Having made this decision I learned that it was significantly cheaper to have the boat on the hard for this process, so I decided to bite the bullet and have the boat hauled.  Having made this decision, I needed to get the most for the hauling buck, so I arranged for an out-of-the-water survey at the same time.  I needed this anyway for Insurance pruposes.  All underwriters I contacted wanted fasteners pulled and photos of the bottom by a certified surveyor.  Additionally, it was time to replace zincs as well.
Up to this time the boat yard and marina where the restoration was being conducted hasn’t done much work on the boat.  I was going to need a new boot strip painted, and since the boat yard won’t let non-employees work on the boats while in their facility,  I asked them to touch up the bottom paint and paint my new boot stripe while the boat was out of the water.
I met the surveyor at the boat mid morning.  He had done the previous survey, and had actually owned this very boat himself some years before.  He said he was blow away by how good the boat looked and how tight the hull was.  He found nothing to be critical about, but did suggest we put another couple stuffing rings in the prop shaft log while the boat was out.
The termite company was a day late, claiming a misunderstanding but got the boat wrapped up and gassed by the end of the following day.  Being Thursday, and needing 48 hours, and the yard being closed on weekends meant the tent was now not coming off until Monday.
I met with the Yard owner and he suggested that they prepare the old boot stripe for painting, but hold off until the hull was painted, saying he would give me a "Free" haul out to paint the strip when the rest of the hull is finished. 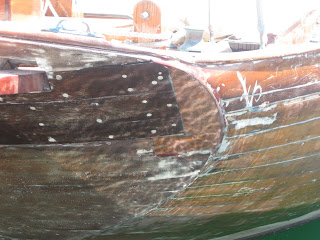 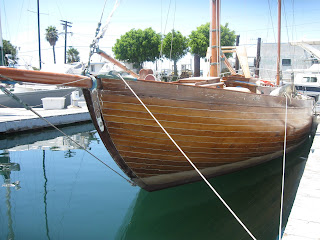 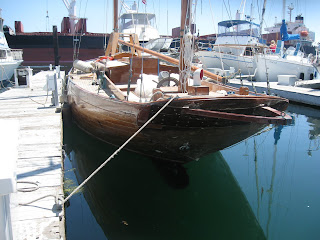 The boat was back in the water by Thursday and the hull preparation continues.  West system was applied to the hull in prperation for the first coat of primer, but when I saw it for the first time over the weekend, it looked as though the hull was varnished....Wow was that pretty!  I was tempted, for a very fleating moment, to varnish the hull but quickly came to my senses.﻿
Posted by Capt. Cash Yachts at 12:29 PM